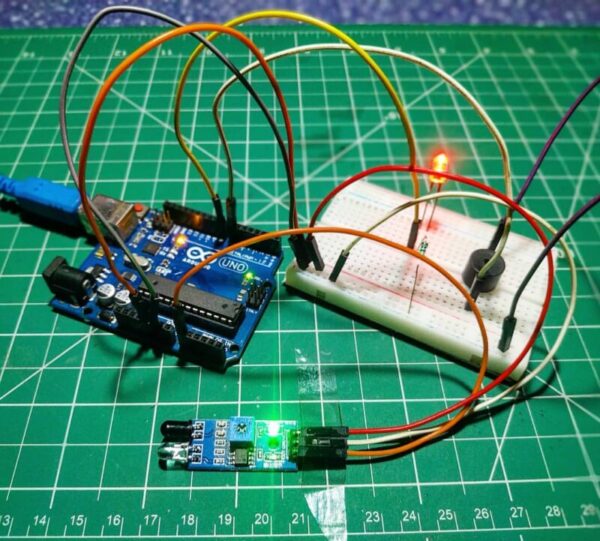 We all have sure observed that our phone display turns off during phone calls when
we put it near our ears. So, do you ever wonder how does this happen??? It is not
a hi-tech thing but a simple IR sensor to detect the obstacle near the phone we are also making the same project in this article with IR sensor with Arduino. Also, in
many other devices like toy helicopters which fly if we put our hand under it or
any of the drones which can fly and land automatically. All these devices use IR

sensors to detect obstacles or short distances.
Many other versions of ir distance sensor Arduino and kits are available in the market for a good
price but we are here to encourage you all to DIY yourself the simple things with
the help of basic components like Arduino, led, buzzer, and a few others.

How to make Obstacle Detector By IR Sensor with Arduino: –

Components used in this are as always very basic ones, an Arduino Uno or any
other microcontroller you have, an LED, a buzzer, and a few others. There are basic,
good, and also arrays of IR sensors available in the market for various purposes but
the use and working of each is the same but the difference in array in simple one it that in
the array you get the average value of 4 to 5 IR sensors to get more error-free value,
this we’ll discuss some other day in the future but today let’s switch over to our topic
i.e., IR SENSOR. So as before it is the most common sensor among beginners and
very interesting projects can be designed using this like line follower robot,
Obstacle avoiding robots, and many others. IR sensor contains two LED’s one is
white which is an Infrared Light transmitter and another one is Black which is an Infrared
Light receiver. As the name suggests their work is so obvious. The sensor is built out of
LM358 IC is similar to LM393 IC from which I think you all must be
familiar with and know a bit about this IC.

The sensor also has an onboard power led and also an onboard Status led which will
blink whenever the sensor detects or receives back the infrared light emitted by
infrared emitter.
The sensor gives both digital and analog output. The difference between the two is very
simple in digital output only high or low means either 1 or 0 is transmitted to
a microcontroller but in the analog signal, a wide range of values from 0 to 1023 is
transmitted to the microcontroller which relates to the intensity of light received by
the receiver. You can also slightly trim the values of the IR sensor with Arduino with the help of
a potentiometer provided on the sensor PCB.
*NOTE: – THE SENSOR VALUES DEPEND ON THE DISTANCE OF THE
EMITTED LIGHT, REFLECTING SURFACE, AND RECEIVER. ALSO, BLACK
OR DARK SURFACE CAN ABSORB ALL THE LIGHT INCLUDING
INFRARED SO THE SENSOR WON’T WORK ON THOSE SURFACES.

the above-given circuit diagram is only for the LED notification. when the IR sensor detects anything it will notify by the LED. and the next image is for the Sound notification we will use the buzzer in that circuit.

First, take the power lines onto the breadboard from the microcontroller

Then connect the sensor to the breadboard and connect power to the sensor from powerlines using jumper wires.

Now connect led to the breadboard + to digital pin 13 of Arduino and – to and in series with 220-ohm resistor. Moreover, we can also use it in analog mode for that simply connect the A0 pin of the sensor to pin A0 of the microcontroller. Enhance this version by adding a buzzer to it also like in the above diagram. Connect -live of the buzzer to GND on a breadboard, and +tive to 5V on a breadboard.

//For analog put this code in Arduino IDE

As the code in the setup section, we define the pin along with the type to which the sensor is connected also we initialize the pin and type for led and buzzer.

In the loop section, we read the digital value on pin 2 of the microcontroller and according to the value, we apply conditions either 1 or 0 to turn the led and buzzer on or off.

In the analog code in the loop section, we read the analog value i.e., 0-1023 values on pin A0 and according to the value of 200 or more, we turn led and buzzer on or off. 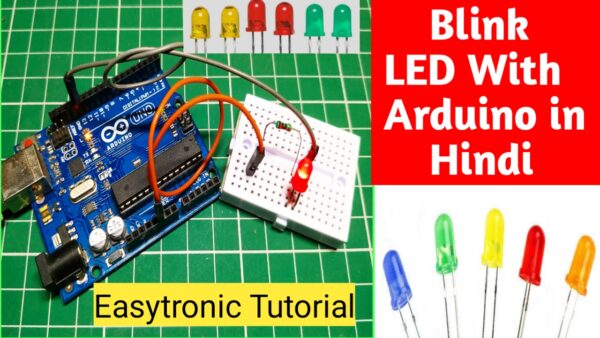 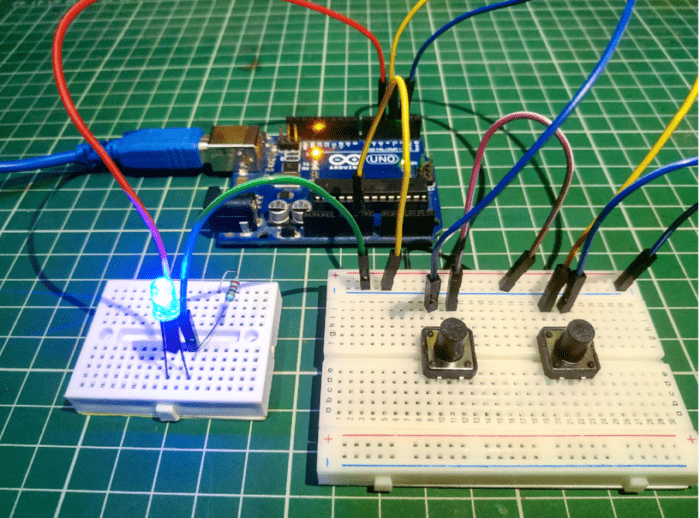 4 thoughts on “Obstacle Detector By IR Sensor with Arduino”