Are you searching for an Arduino light dimmer circuit? if yes then you are at the right place.

we are going to teach you that how you can make a light dimmer circuit using an Arduino UNO. Here we can control the brightness of the LED with the help of two pushbuttons.

Do you know how a pushbutton works with Arduino, if not then check it first? You can also check out our projects on Arduino and IoT.  For making more such amazing projects read our E-book on Arduino having 10+ projects with well-labeled circuit diagrams.

Make the connections according to the circuit which is given below and then upload the code.

How Does light dimmer Works?

You can also check the automatic street light system with Arduino made by us.

You can buy the whole components from the given link we have to share the amazon link. from where you can get a good discount on the components. 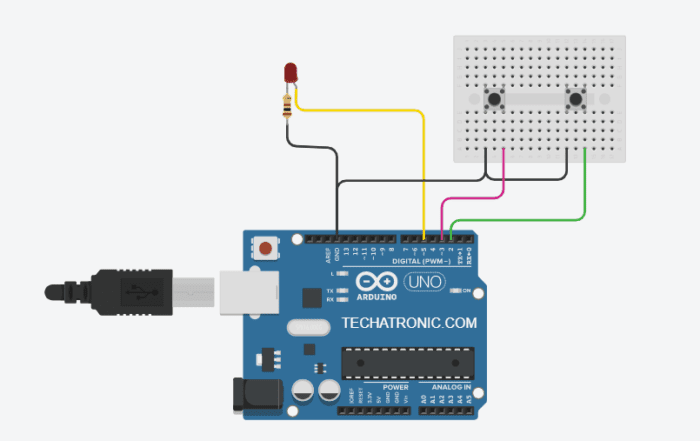 NOTE: Copy this code as it is and paste it on your Arduino IDE software. Then upload the code to the Arduino.

We hope that you like this light dimmer circuit and must try to make it on yourself. If you have any doubts regarding this project then ask them in the comments section given below. Also, do check out amazing tutorials on Arduino and Raspberry Pi.